I would like to share with you some important developments in the field of orofacial and dental development that could have a profound impact on our patient’s general health.

There is mounting evidence that malocclusion has become more prevalent in our modern societies (1-6). Like height and weight, our face and occlusion develop over a period of time and is highly influenced by the environment and our behaviors. Well recognized behavior problems such as thumb-sucking and mouth-breathing cause very specific patterns of malocclusion. On the contrary, there is no report that any infant is born with a skeletal Class III malocclusion. Malocclusion is always developed over time and subject to environmental stimulus.

The important stimuli that can shape the development of the maxilla and mandible includes mode of breathing, pattern of swallowing, and mastication. These factors also influenced the formation of our occlusion. The pattern of breathing and swallowing are established very early during the infant stage when mammals fine tune these vital reflexes during breastfeeding (7). Unfortunately, in modern society, people often interfere with this important developmental process with bottle feeding and/or pacifiers.

A transition from hunter-gather to agriculture lifestyle coincided with a reduction in the size of our craniofacial dimensions (8-11).  The modern softer diet reduces demand on our mastication muscles and subsequently less stimulus for the bone development occurs to both the maxilla and mandible. Prevalence of allergies and poor indoor/outdoor air quality promotes higher frequency of mouth-breathing in modern city dwellers.

Mouth-breathing causes a low tongue posture which in turn reduces the transverse development of the maxilla (12).  Tongue-thrust swallowing pattern and overactive orbicularis oris muscles are always observed in patients with dental crowding and/or excessive overbite.

Malocclusion is simply a sign that the maxilla and mandible have not developed normally, and it is caused by a combination of genetics and abnormal functions such as mouth-breathing, tongue-thrust swallowing pattern, and inappropriate action of mastication muscles. Myofunctional therapy needs to be included as a part orthodontic treatment to correct these abnormal functions.

The good news is that behaviors, unlike genetic factors, can be modified. This points to the importance of early screening and intervention. Studies have shown orthodontic treatment such as maxillary expansion can be effective in treating pediatric sleep apnea (14). Mandibular advancement appliances have also been recognized as an effective treatment method for obstructive sleep apnea (15). Arch expansion and forward development of the maxilla and mandible should be the primary treatment of choice when dealing with malocclusion because these strategies can positively impact the airway and improve our patient’s health. Total airway volume is increased after maxillary expansion with an average airway expansion of +11.54 % (2.35 % increase per mm expansion) (16).

The conventional treatment of serial extraction is designed to guide the eruption of the permanent anterior teeth, but it does not taken into account the facial growth and therefore does not provide any benefit for the airway development. Extraction does not address the etiology of malocclusion such as abnormal oral functions. Couple recent studies links missing teeth with an increased risk of developing obstructive sleep apnea/OSA(17). The risk of developing OSA correlated positively to the number of tooth loss (2% increase in risk for every tooth loss). People who loss their teeth also has greater odds in developing OSA as they age thus the breathing and associated health problem gets worse as these individuals grow older.

Treating patients in the early primary dentition or earlier seems to achieve the most favorable response in terms of the arch expansion and forward facial development. The reason is that certain dimensions of facial development complete a lot earlier than the somatic development. The cranium size is 90 percent complete by age 6 to 8. Cephalometric tracing from various orthodontic growth centers show the lower anterior facial height on average is about 70 to 80 percent completed by age 6 (Fig 1). The mandible is developing fastest in the first year of our life then slows down gradually as we get older (18).

When treating patients in the conventional 12 to 14 years age or later; on average there is minimal facial growth potential left for positive skeletal modification. We can still straighten teeth but it is often not possible to predictably correct the skeletal deficiency and it is very difficult to improve the airway (with the exception of bi-maxillary advancement orthognathic surgery).

It has been taught in dental school that the mandible cannot be expanded or modified. The following cases will demonstrate that the lower arch can be expanded to correct most dental crowding problems provided that the problem is intercepted early on. I deployed a physiological expansion method that accounted for the rate of PDL remodeling. Average expansion rate is 1 mm per month. Notable benefits from the early treatment with expansion and functional appliance are the positive development of the face, body posture, and improvement of the airway. 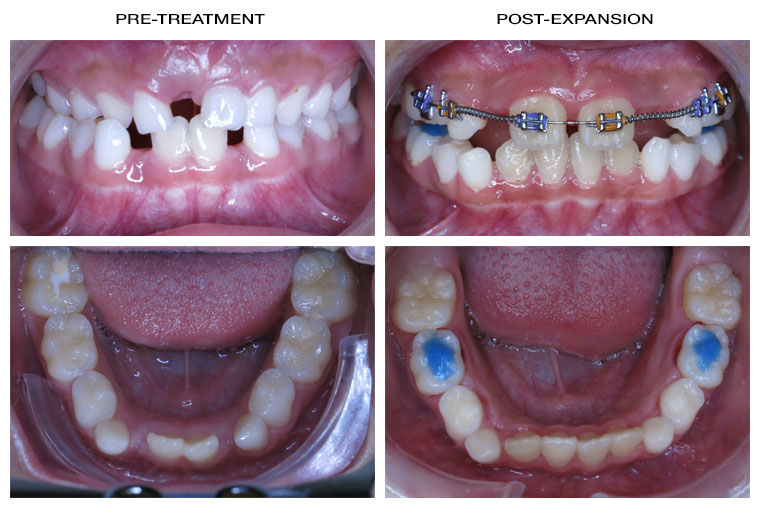 Case 3: Forward facial development of maxilla and mandible after expansion of dental arches.

Case 4: Improved head posture and lip competancy in 10 months. Note the change in her neck curverture; patient changed from a head forward posture to a better neutral head position. This indicates an improvement in airway which results in less positional compensation required by the patient.

I highly recommend early screening to diagnose potential growth and devleopment issues. Early intervention can result in the best growth response. Please do not hesitate to contact me if you would like to learn more about the orthodontic treatment options that have the potential to make the face grow more favourably as well as improve our most important function -- breathing.

(4) Brash, J.C.: The Aetiology of Irregularity and Malocclusion of the Teeth. Dental Board of the United Kingdom, London, 1929.

(10) Sardi ML, (2006) Craniofacial morphology in the Argentine Center-West: Consequences of the transition to food production. Am J Phys Anthropol 130:333–343